The arts and the economy in the spotlight 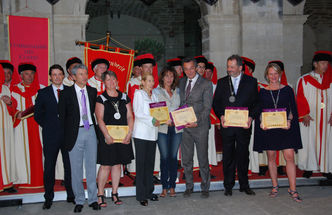 The arts and the economy in the spotlight

As the Commanderie des Costes du Rhone will continue to organize events of this magnitude can be safely said that the reputation of the appellation continue to increase in all spheres of society in France and abroad.

For the evening of June 28 at Suze la Rousse has been a success, combined with friendship and loyalty. It was orchestrated by the Grandmaster, host an exceptional chapter followed by the gala dinner. Under the sign of friendship is the Commanderie des Costes du Rhone, which after a reception, honored with many servants, advocates and fans of the Côtes du Rhône wine. The world economy was in the spotlight with Guillaume Sarkozy, General Delegate of Mederic group vice president of Medef enthroned by the great master Patrick Galant, Virginia Bodescot, Human Resources Director of INSEAD Fontaineblau, Jean Jacques Branger Company Manager in Neuilly, Jean-Pierre Durand President of the House Ogier in Châteauneuf-du-Pape and Director of Strategic Marketing and Carine PRETERRE Advini Director General of Fair of Paris. The administration also with Bernard Gonzalez, the Prefect of Ardeche inducted by the Grand Chamberlain Andéol Pommier, Arts finally with Eugenie Zumloh former Australian tennis pro and a specialist of Contemporary Art and Clémentine Célarié, actress, singer, writer welcomed by Alain David, winemaker that illuminated the evening. Previously a new Commander, Bruno Bouche had been knighted, proving his loyalty to the appellation wines, from rejuvenating the ranks of the rich Commanderie already more than 200 members throughout the world and especially guarantee a future at the Commanderie. All have sworn allegiance to the wines of the appellation.

A meal animated by the Choir of Cotes du Rhone, bringing together nearly 200 guests put a highlight of the festivities. This chapter was held in the courtyard of the castle of Suze la Rousse has been a great success thanks to the Côtes du Rhône wine which brings together producers and lovers. Only a late night thunderstorm, which caused a drop away, came a little disturbing a remarkable evening.