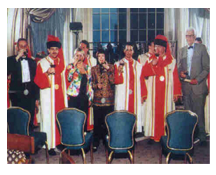 It was the fruit of a meeting organized by Claude Foussart, Consul of the Barony of Montreal, between the leaders of the Commanderie des Costes du Rhone and Bernard Guet, General Manager of the Grand Hotel Park Hyatt.

The latter, a French national, was a renowned wine cellar at the Hyatt.

Max Aubert, Grand Master of the Commanderie, Emmanuel Drion, Delegate General of Inter-Rhone and Patrick Galand, Director of the Wine University, traveled to Philadelphia to give birth to this American barony and appoint its Commanders and the Consul Bernard Guet.